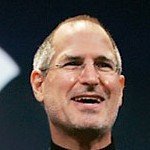 This week Apple investors have been facing what many have described as their deepest fear. But, a rebound in the share price later this week suggests that they must now be feeling cautiously optimistic about Apple’s prospects, now that Steve Jobs has again departed.

The “fear” is a sustained decline in share price after the hasty departure, on unspecified leave, of the head of Apple, Steve Jobs.  He has departed for health reasons but no information has been made available on his ailment, although cancer is the likely cause.

Early last Monday, the company announced that Jobs is taking a medical leave, for the 3rd time. However, apart from a wobble downward at the start of the week, by yesterday the price had more than recovered. Apparently for the moment Apple’s shares have returned to a consistent feature of this share since the market low point in 2009. That feature is that their shares to continue to rise in value, more quickly than the Dow, NASDAQ, and Footsie.

In reality the market will no doubt have stood back and re-assessed Apple’s strengths as a company when the announcement was made, and these held sway. Apple’s assets are now very considerable, and unlikely to be devalued by the departure of just one man, Steve Jobs. That is despite his undoubted knack for “getting new technology right”.

Most people think of Apple as a seller of computers and phones. They also know about iTunes, of course, but few are aware that Apple controls the largest, and most successful, applications store on the globe.

The company is also very wealthy and sits on a cash hoard of more than $51 billion. Apple also has winning platforms, again these are software based, and it will be able to continue to keep control of its platforms’ futures such that revenue will continue to roll, even if product output should slow.

Apple is around about the third most valuable public company in the US. They drive many global consumer technology markets and theirs is one of the most recognized brands in the world. Apple are also very astute in the manner in which they protect their commercial rights. Their methods, having brought them commercial success will be likely to continued, whoever leads the company. If their current rise in fortunes continues and their current policy continues, which requires paid-for content (music etc) to “call-home” by default, before the user can continue to make access to the data, our futures will all be different though. Look forward 20 years and we may arrive in an age where Apple exerts complete control over the content we see, with all we do see through their platforms, shaped to fit an idealized experience. Their methods allow very little bowing to dissension, and no undesirable people or applications can be permitted on their platforms, of course.

Apple, uses their all in-house approach (which is the antipathy of the PC world), to their advantage, with its tightly controlled app platform and limited number of devices on which these apps can run. The big gain for them is that it is a much more predictable deal to buy into for anyone with a business that needs an app.

Apple themselves have pointed out that they have been around for 34 years. They feel that they should have by now earned more credibility and trust from some parts of the press, who should give them a little bit more of the benefit of the doubt on their abilities. The week’s events tend to confirm their view.

But, Apple is not all that mature about allowing non-mainstream access to its platform as can be witnessed by its recently having rejected an app from a political cartoonist.

Is Technology Finally Destroying Jobs Much Faster Than It Creates Them?
High Fiber Diet Benefits for Over 50’s Confirmed