By Alexandra Hemming on December 29, 2010 in media 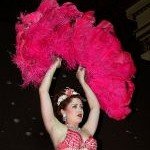 Lingerie firm Gossard is the latest to confirm that the success of a film starring Christina Aguilera, and, thousands of women taking up the exotic dance craze, has greatly increased demand for their products. Each of these dancing ladies need the lingerie manufacturer’s style of old-school underwear to do it, plus the same trend has been seen with their customers more generally as well.

The new musical “Burlesque” is both creating and running with the craze. In the film Christina Aguilera makes her big-screen starring debut. In doing this, she is following the same route as pop princesses Britney Spears and Mariah Carey did before her. The good news is that although her acting in the present role has not won over all the critics, Aguilera has been described by some as having the ability to become a lively starring presence in future movies.

If, like many, you have not previously thought much about the burlesque genre, we will explain its origins. Burlesque began in the 1840s, early in the reign of Queen Victorian in the United Kingdom. In those days “class” was all-important. The upper class ladies were expected to act as just that and be demure and polite, but the men when away from home would if given the opportunity enjoy an altogether racier female caberet presence. So, “burlesque” stage show acts evolved in some clubs, limited to a small number of ladies in the biggest cities, and focused on lowbrow and ribald subjects. The genre developed further in the US and France, and burlesque caberet dance scenes are of course the best known today, and are enjoyed for their flamboyance and style.

The film is a great vehicle for the talents of Cher and Christina Aguilera, and they have been appearing together to promote the movie and both attended the Los Angeles premiere of the movie. They were wearing two very different but certainly exotic burlesque style outfits. Cher went for a short, body-hugging, and glitzy look, while Christina chose the flowing, strapless option, in a sea-green outfit.

A number of commentators on the movie have pointed to the script not being the strongest point of the movie. In one scene Cher helps Xtina apply her make-up, in a moment backstage, which you might find particularly touching, or just cringe-making. She enlightens her audience with the gem of wisdom that when you are putting on your make-up, it’s like you are an artist, but instead of painting a canvas, you’re painting a face.

Ali (Christina Aguilera) is a small-town girl with a commanding singing voice who raises herself from poverty and a future fraught with danger, to follow her dreams to LA. She tires of unsuccessful singing auditions in LA when she spots a hot dame in stripey garters, on a classic US style fire escape. And, before long she arrives at “The Burlesque Lounge”, a majestic but fading theater that is home to an inspiring musical revue. She takes a job at the start, as a cocktail waitress from Tess (Cher), the club’s proprietor and top artist performer.

Love interest is strong and never far away for Ali, of course, and she soon arrives in the presence of Jack (Cam Gigandet) who, is smitten by another girl, but not for long.

The owner of this website, is a participant in the Amazon LLC Associate Program, an affiliate advertising program designed to provide a means for sites to earn advertising fees by advertising related products from Amazon properties, including but not limited to amazon.com, endless.com, myhabits.com, smallparts.com, and amazonwireless.com