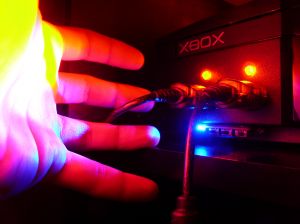 A recent press release reveals that Xbox gamers play on average 7 different games each month, in (on average) three to four sessions, but an estimated 41 % play for three or four hours each day. Can sustained game playing at this rate really be healthy for those that do it?

Microsoft has also published as part of their findings that their survey has put an average spend rate for Xbox users in the UK at a high £63 ($115) a month on games. That’s way more than the average US spend on tobacco (at $27/month), and more than half an average US citizens spend on all entertainment, according to the US Bureau of Staitsitics, April 2009 data.

The survey publicized this week quotes from only a small sample of just 251 people between 25 and 34 and is reported in MCV.

Facebook has also released figures recently which describe the average member as spending 7 hours a month on the site, which is high for a WWW2 social site but well below the typical gamer’s average.

Clearly, interesting and sociable as they are, these Social Networking Sites don’t have the draw of a good game console. Nor do social network offerings have (it seems) quite the same capability to soak up their members’ time, to anywhere the extent that a good computer game will.

These statistics, albeit flawed due to the small sample size, do point to some interesting research work that needs to be done on the long term effects of excessive gaming.

Microsoft does not discuss the wisdom of players spending excessive amounts of time using their products. That’s understandable in the context of the report they give which is all to do with marketing to them. However, young teens may be online when it would be far better for their psychological development to be interactive in a more productive way.

Microsoft Advertising’s head of research for data and analytics Julie Forey told MCV that “Compared against the average male, gamers represent an attractive proposition for marketers,”.

“.. [with] over half playing for more than three hours each day, this provides firms with a profile from which they can base their message.”

There is no doubt that the Xbox, although slow to be accepted by gamers originally, is now a very successful product and marketing business for Microsoft. They have done well to persist with their gaming system to build what is now an impressive community of gamers that have been pre-sold to the extent that they are willing to spend comparatively large amounts, on the latest hardware while also continually adding new games to go with it.

This is no doubt to an extent to with the sophistication of the Xbox 360 console device when compared with its competitors. In fact Microsoft’s Xbox 360 blows the other consoles out of the water when compared with similar offerings on the market. In processing power alone it towers over the likes of Sony’s Playstation 2 and Nintendo’s Gamecube.

Games for the 360 are also easy to sell.  For example, the recently released Ghost Recon: Advanced Warfighter sold 240,000 copies in just a matter of days when launched.