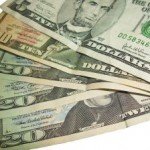 US Mortgage rates have risen in the last week, with the average rate for 30-year fixed-rate mortgages climbing back to a level not seen since April of last year, according to Freddie Mac’s (FMCC) weekly survey of mortgage rates.

This may on one hand be seen as a sign of just how lacklustre the recent financial news has been that such a rise from a historical low, is being seen as news. After all, if the economy is to return to previous levels of activity in the US, and throughout the western nations there will be increasing demands on the money supply. That would be expected to pull interest rates back to more normal rates seen over the past twenty to 30 years, at between 5 and 10 percent say, during annual inflation years of 4 to 6 percent (say).

A US report suggests jobs are also more abundant in the US than in the recent past as the number of people applying for unemployment benefits in the US has fallen to its lowest level since July 2008.

The economic news for Canada is also positive, with statements being made today that a strong economy will support stable Canadian house prices. This, the reports say, will be the case for the next two years even when the effect of expected increasing mortgage rates is factored in, according to RBC.

However, other sectors are not so sanguine about Canadian house price prospects and “Canadian Mortgage Broker News” suggests today that with their rates following the US trend, a substantial correction in housing prices may be more likely, this would follow from any major disruption in incomes and that might come from an unexpectedly huge jump in mortgage rates.

In the UK, where mortgage rates have not seen the same rise, and remain below US levels, the possibility of a rise to follow the US in the months to come, is of concern. With a continuing weak economy and the government tax rises, fuel increases, and government spending cuts pulling government money out of the pockets of all public sector employees, could yet cause considerable further financial strain on UK residents.

In Holland the Dutch Consumer Association (Consumentenbond) is putting pressure on banks on what it sees as high mortgage rates. It has launched a campaign to try to get banks to lower their mortgage interest rates.

While in China, China’s Ministry of Housing and Urban-Rural Development will raise the Public Housing Fund (PHF) mortgage rates for home buyers starting next week. The rate for the two forms of loans affected will be raised from 4.3 percent by 0.2 percentage points, and 3.75 percent to 4.0 percent, up a 0.25 percentage.