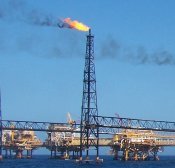 Brent Crude oil has risen to just over $100USD today, signifying an important psychological threshold on the world oil trading markets. Other oil prices have risen as well. Only this premium crude oil has reached this price, but other crudes are not far behind.  According to oil price and market commentators, the cause is not increased demand due to the cold winter. It has been said that although, in many developed nations this is proving a very cold winter and national stocks will be expected to be lower now than usual, it is not that forthcoming re-stocking demand, which is the cause.

Currently there is thought to be no shortage of oil available, and no lack of refining capacity. So, this increase is not a case of a high supply requirement and demand pushing prices up.

Much more important than the oil market itself to these price hikes, is the nervousness felt about the political upheavals underway in Egypt. Market investors are factoring into their forecasts the possibility that unrest may spread from Egypt beyond Tunisia and Jordan, and should that be the case, oil production will be affected and fall. If availability falls, market forces will force up the price of existing supplies and it seems that this is being seen as a possibility worth buying oil for.

In times gone buy there would have been a real fear that the Suez Canal might be closed to shipping, as a result of the current turbulence, including the transport of oil into Europe, and that would cut-off vital energy supplies to Europe. However, a number of reporters have discounted this on the basis that the tonnage of oil passing through the Suez Canal is very small these days compared with the quantities of oil traded and shipped worldwide. There is also not even any evidence reported that the protests will yet have any effect on transport through the Suez Canal.

So, the consensus is that the main cause of the price in crude oil is more to do with a general unease among investors about political turmoil in the Arab world than the current reality.  Older investors who were around in the 1950s, will remember the very damaging effect of the canal closure during the Suez crises which led to real shortages in Europe. Indeed the spectre of closure of the Suez Canal would still be of concern, but if it came about the effect would be far less than at that time.

With the economies of many nations still depressed, the news of  higher oil prices which will be passed on in higher energy costs, is an unfortunate development. These higher costs are then passed on in higher prices generally. This can have a further effect where those price rises, in turn, push up wage demands, initiating a very unwelcome price spiral.  That is not a pleasant thought for anyone.

Furthermore, oil price rises hit some sectors of the economy harder than others. For example, farming communities which use chemical fertilizers for which the feed stocks are often petroleum products and natural gas, will have to pay more. Industrializing countries also suffer more from an oil price hike, as they are more reliant on high energy use manufacturing sectors within their economies.