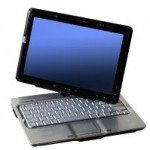 Tablet PCs are predicted to become a "dinosaur"

Despite the investment and promotional energy currently being expended by Apple with their most recent iPad, Microsoft thinks otherwise. In fact, Microsoft has forecast today that sales of tablets will soon be squeezed out by the rapid touch screen-like development of mobile phones and ultra-portable computers.

For the non-technical amongst our readers a tablet PC is a lap-top that has a touch screen that is touched with a pen. The screen also can usually flip over on top of the keyboard so that it forms a sort of “writing pad” that you can write notes on.

The Tablet PC itself evolved as a culmination of advances in shrinking notebook hardware and improvements in built-in digitizers as methods of input. A digitizer is usually integrated into these devices as part of the screen and isn’t visible to the user. It correlates physical touch or digital pen interaction on the screen, with the virtual information portrayed on it. Another way of describing tablet’s digitizer can also be described as an absolute pointing device rather than a relative pointing device like a mouse or touchpad.

A user can enter text using the built-in handwriting recognition software, use an on-screen (virtual) keyboard, use speech recognition, or plug in a standard keyboard. For those that learn the techniques involved shorthand-like entry methods can be used, which enable pen-driven input at speeds comparable to touch-typing. Some of these applications which are unique to the Tablet PC, include AlphaTap and ShapeWriter. There are also on-screen keyboards without shorthand capability which include Inscribe and MessagEase.

The competing phones are given the name of Tabs. Amazon, will soon be selling the Samsung P1010, which in most respects, other than screen size directly, competes with tablet PCs. You may have heard of it, as it’s also known as the Samsung Galaxy Tab, Wi-Fi version, for a rather higher price than anticipated at £299 in the UK, including delivery. Hwoever, it is certainly cheaper than the iPad2.

Another tablet recently released in the UK is the BlackBerry PlayBook which its makers hope is set to kick start the UK business tablet market. However reports from businesses are sceptical about efficiency gains being sufficient.

V3.co.uk has reported that most people buying a tablet PC will add it to their stock of devices, and many will use them in order to access social networking sites on the move.

Figures suggest that the UK has the highest rate for people that log into sites such as Twitter and Facebook on the move, according to TNS.

Indications are that Microsoft may well be right, and that although tablets may give a larger screen and a better multi-media experience as a result, most will be content with using a “tab” type mobile phone rather than spending the extra for a tablet PC. Because, over 5.5 million Britons access social networks every day from their mobile and this figure will continue to grow.

Did Amazon’s Kindle eBook Store Just Announce the Beginning of the End of the Paperback?
Jennifer Hudson’s Weight Loss Plus How and Why She Did It!