Hemp Hearts have many benefits and are the new Trending Health Food.

What are Hemp Hearts? 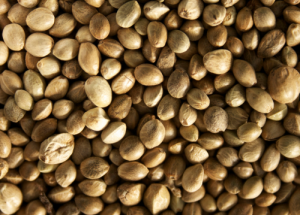 They are shelled hemp seeds and they are increasingly being recommended by health care professionals and are especially useful for older individuals with chronic health problems. They sold in increasing quantities through health food stores and online through such websites as the Amazon Store.

Organic hemp hearts (also known as “shelled hemp seeds” or “shelled hempseed”) are a nutritious, versatile, and tasty food. Cold-processed (under 104°F) straight from fresh, live hemp seeds, hemp hearts are about the same size as a sesame seed. In the best products available, the hard outer shell of the hemp seed has been removed mechanically without the use of hexane or any other toxic solvent, leaving just a soft, creamy, and nutty “hemp heart”.

Hemp Hearts are packed full of protein with products available with about 10 grams of plant-based protein per 30-gram serving size. That means that Hemp Hearts are a great way to get an ideal ratio of Omega-6 to Omega-3‘s including the rare EFA known as Gamma-Linolenic Acid (GLA).

There are plenty of Hemp Heart products available that contain no additives or preservatives. And, there are also sellers offering Hemp Hearts made in dedicated hemp food facilities that do not process any dairy, soy, nut or gluten products, so that allergy sufferers need not be concerned that they may develop any possibility of an allergic reaction from such products.

Are Hemp Hearts Good to Eat?

Most agree that they have a pleasant nutty flavor and are a most versatile product. Sprinkle hemp hearts on salads, or add to cereal, yogurt, in baking or even into smoothies!

There’s no need to grind the seed as they are ready to eat straight from the bag, and fans of this food say that these seeds make it very easy to get omegas, protein & fiber into their diet.

The Benefits of Hemp Hearts

Those that eat them as part of their daily diet say that regular inclusion of a portion for breakfast provides sufficient energy to make you want to be more active and as a result, this increases productivity. Hemp seeds are nutty and sweet like pine nuts and the outcome from that is that many people say that this food helps them enjoy life better.

An added advantage is that it is reported that after eating this food you will not need energy boosts from coffee and other stimulants. That, in fact, is where this food's weight control capability kicks in. Those that are already eating this food say that they naturally select fewer sweets, reduce their snacking, and no longer find sugar-based drinks particularly appetizing.

It might sound almost too good to be true, but testimonials have shown that the GLA in hemp may be able to help to alleviate arthritis, joint mobility, eczema, hormonal balance, migraines, menopause in women, healthy cholesterol and blood pressure levels. Some say that they even assist with weight management.

We think that these seeds which are nutty and sweet like pine nuts can only rise in popularity, so expect to read more about them in the future. But, we do not claim they have any specific benefits as this would contravene FDA restraints on making claims for the benefits hemp products.

The U.S. Food and Drug Administration has completed its evaluation of three generally recognized as safe (GRAS) notices for hemp seed-derived food ingredients. The GRAS notices were submitted by Fresh Hemp Foods, Ltd. The agency has no questions about Fresh Hemp Food’s conclusion that the following ingredients are GRAS under their intended conditions of use: hulled hemp seed (GRN765), hemp seed protein powder (GRN771), and hemp seed oil (GRN778). via www.fda.gov

What is the Difference Between Hemp and Marijuana

Hemp/industrial hemp and marijuana are two distinct varieties of the same plant species. Hemp is a fiber crop. Marijuana is a drug crop. However, these definitions have become confused in the last 60 years. Recently, a movement has begun to distinguish the terms again. It is important to understand the history of usage of these terms in order to eliminate the confusion.

1600-1930s Hemp's Long History in North America The word ‘hemp' has been in the English language for over 800 years. The word ‘marijuana' is only 100 years old. From the first settling of North America until the 1930s, hemp was the most common term for Cannabis sativa fiber crops. ‘Marijuana' was never used to describe hemp fiber crops, which were grown for canvas, rope, fuel oil, and paper. ‘Hemp' fiber crops were historically low THC and completely non-psychoactive.

The 1930s-1940s Marijuana tax Act confuses ‘Hemp' and ‘Marijuana' In the 1930s, the psychoactive (high-THC) variety of Cannabis Sativa, imported from Mexico, became common in the southern U.S. It was called “marijuana”, a word popularized through the “Reefer Madness” campaign, to distinguish it from the “hemp” fiber crops (which no one ever smoked).

In 1937, the passage of the Marijuana Tax Act hopelessly confused the terms “hemp” and “marijuana”. For the first time, Congress defined these distinct varieties of Cannabis sativa as being the same. What had been commonly known as “hemp” was now “marijuana”.

In 1957, the last hemp fiber crop was harvested in the U.S. Because low-THC Cannabis sativa fiber crops were now extinct, the word hemp dropped out of use and was forgotten.

1960s “Marijuana” Legalization Movement Begins In the 1960s, the psychoactive variety of cannabis sativa (“marijuana”) became popular among the counter-culture. The movement to legalize “marijuana” in the 1960s and 1970s did not use the term “hemp” to describe “marijuana”.

In 1985, the word “hemp” re-surfaced in the book “The Emperor Wears No Clothes”, by Jack Herer. This book uncovered information that had been lost for almost 40 years about “hemp's” historical uses as a fiber crop. The book also touted “hemp2 as a solution to modern environmental problems. Because The Emperor was targeted at a “marijuana” movement and since it was not widely known that low-THC varieties of hemp existed in Europe and Asia, it was believed that “marijuana” must be legalized to allow industrial uses of “hemp”. And because it was the environmentalists and the counter-culture that began promoting hemp as an alternative fiber crop, they were not taken seriously.

In Europe, some countries (like France and Spain) had never stopped producing hemp. In 1989, the European Economic Community developed rules to govern hemp production that applied to all its member countries. The EEC defined registered seed varieties for low THC hemp and methods for testing hemp for THC content.

In 1993, England officially recognized the difference between hemp and marijuana, to make its farmers competitive in the EEC. In 1994, Canada, seeing competition from Europe, allowed hemp production.

In November of 1994, the Governor of Kentucky, seeing competition from Canada and Europe, appointed a Task Force to study the commercial possibilities of hemp in his state.

For the first time, farmers, manufacturers, processors, and agricultural researchers in North America began to take a serious look at hemp as an agricultural crop and alternative fiber. As well, the hemp environmentalists within the marijuana movement see that registered seed varieties exist to distinguish hemp from marijuana. This diverse coalition begins using the word industrial hemp (or simply hemp) to refer exclusively to low-THC non-psychoactive varieties of Cannabis sativa. The goal of the industrial hemp movement is to allow legitimate production of hemp fiber crops and to explore the environmental benefits of hemp as an alternative fiber, pulp, and oil source.

In January 1995, Senator Lloyd Casey (D-Northglenn), made Colorado the first state to attempt to define hemp/industrial hemp as distinct from marijuana when he introduced the Hemp Production Act. Unfortunately, this bill was killed in Committee due to objections from the Federal Drug Enforcement Administration.

In October 1995, the steering committee of the North American Industrial Hemp Council made industrial hemp an entirely distinct issue, separate from the legalization of marijuana.

An Introduction to Purchasing Management – Buying and Supply Chains

Bollywood Dance and the Beginner Facts You Need to Know

The owner of this website, is a participant in the Amazon LLC Associate Program, an affiliate advertising program designed to provide a means for sites to earn advertising fees by advertising related products from Amazon properties, including but not limited to amazon.com, endless.com, myhabits.com, smallparts.com, and amazonwireless.com
1 Shares
Tweet
Share
Pin1
Share
Share