David Cameron: “this is the greenest government ever”

Ten years ago the lights on Britain's road to a low carbon economy were firmly set at “green”, as the Labour Government departed from Westminster after 13 years. David Cameron had defeated Labour having rescued the tories from “unelectability” by embracing the environment, and announced (immediately after achieving office) that he aimed to lead the “greenest government ever”.

Even at the time, there are some uncanny parallels here with Tony Blair's “third way”. The fact that David Cameron had no personal vision for the green economy provided all the permission that was required for that government to quietly ignore their mandate.

While still pretending to be “green” and to be investing in the preservation of the local and global environment, piecemeal decisions across Whitehall worked against any notion of becoming the greenest government ever. The worst of it all was that the government got away with the pretense.

The following announcement was a common example of the “fake” nature of that government's “greenness”.

“The government has achieved its aim of being the “greenest ever”,

David Cameron said, in his first significant remarks on the environment since reaching office. 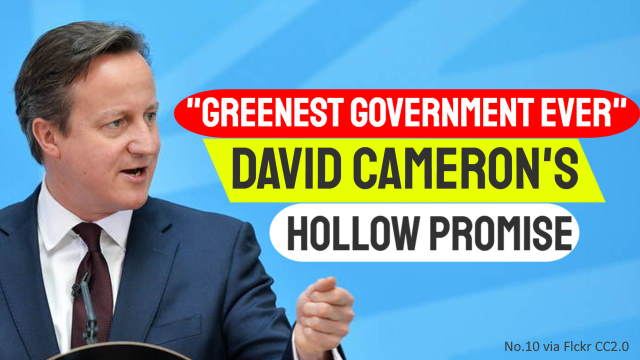 But just a few years later you can see just how much the PM's personal commitment to this, had actually convinced the public:

” a recent poll found that just 2% of the public thought Cameron was leading the greenest government ever.”

The greenest government ever – or never?

The prime minister has said he wants the new coalition administration to be “the greenest government ever”. David Cameron was speaking to civil servants at the department of energy and climate change on his tour around Whitehall to introduce the new government.

I don't suppose the prime minister was even consulted about such a footling little matter. But it's clear that his advisors hadn't the first idea about the kind of signal this dogma-driven decision sends out, ensuring that his claim that this will be the ” greenest government ever ” is in deepest jeopardy.

In May 2010, David Cameron, the UK's prime minister, made a bold claim. As he finalized talks on forming a governing coalition with the liberal democrats, he told an audience of civil servants that this would be “the greenest government ever”.

Opinion polls forecast the greens doing badly in next month’s elections, possibly dropping from the current 58 MEPs to 38. Meanwhile, British Conservatives were having a hard time justifying their “greenest government ever” claim with their record showing an apparent delight in cutting green subsidies. This was especially seen in the solar panel industry where many jobs were lost and young and growing companies in the nascent industry were folding.

Cameron: I want the coalition to be the ‘greenest government ever'

In May 2010, David Cameron promised the coalition would be the “greenest government ever”. A year later the Environmentguardian.co.uk pledged to track his progress.

To be fair to the credibility of the UK Press, most pundits doubted the claim meant anything at all at the time. Some said that David Cameron's pledge to lead “the greenest government ever” was almost certainly unscripted and off the cuff. “Nobody quite knows what it means”, they said.

‘Greenest government ever' or ‘green crap': which way will David Cameron jump?

Before long far from claiming the ‘greenest government ever’, Cameron and his colleagues were saying how keen they were to ‘get rid of all the green crap’.

But, on further occasions, David Cameron again boasted that his was the ‘greenest government ever’. In fact, he said that when timing could not have been worse, as the government announced that it was scrapping funds for the green deal, its flagship energy programme.

So, there we have it! At the start of the first Conservative parliament after gaining power from Labour, David Cameron claimed that the coalition would be:

‘the greenest government ever’.

Over the course of the parliament, this claim was frequently tested by environmental campaigners and his political opposition, particularly concerning the government’s attitude to:

What happened to the Conservatives' Green Agenda?

At first in 2010, the government simply went quiet over their Green Agenda. And in the quiet you tended to hear more of the whispers, the doubts were first magnified, and by cuts and inaction became reality. The Liberal Ministers in the coalition were remarkably ineffective in moderating government policy in this respect.

Huhne believes there was a small band of conservatives still committed to the green agenda (led by Greg Barker and Oliver Letwin), but said that climate and energy issues required a stronger government lead in times of economic hardship.

The greenest government ever?

The UK government stopped funding the Sustainable Development Commission (SDC), as one of its first actions. The SDC (formed in 2000 under the Labour administration of the time), was its independent environmental watchdog and advisory body on sustainable development. He could have good on the abolition of the SDC, by reinvesting the money in other green policies to add substance to the oft-repeated claim of his being “the greenest government ever”, and finally embed sustainability at the top of government agendas. He didn't.

In an election manifesto for the next election in 2015 that sought to widen the tories' appeal to voters in marginal seats, Cameron's party insisted it had stayed true to its promise to be the ‘greenest government ever'; vowing to continue to support the UK Climate Change Act and cut emissions “as cost-effectively as possible”.

The document, released earlier on 14 April 2015 states: “we have been the greenest government ever,

The Greenest Government Ever? Planning and Sustainability in England after the May 2010 Elections

Richard John Westley 2013 has written about the effect of Cameron's government on sustainability through changes to the planning laws. The greenest government ever, was clearly a false statement due to the changes made to planning regulations. These removed much policy on sustainability in England after the May 2010 elections.

Once again another expert was reminding us that the former conservative party leader David Cameron's coalition government in 2010 promised to be “the greenest government ever”. But the truth was that his efforts were undermined by his own treasury and by his political appointments to the Department for Environment, Farming and Rural Affairs (Defra).

They failed dismally to adequately assist the very UK businesses whose support that they had won at the elections.

“Growth of renewable energy is vital for the British economy”,

said David Cameron, who had already promised to lead the “greenest government ever” government. And, yet their actions failed to deliver, and worse, severely damaged that very industry.

The above article is an update on our original article on this subject which we have retained below:

Party Pledge to be “Greenest Government Ever” Rings Hollow

The following article was summarised from the Independent Newspaper UK (Wednesday 26 October 2011) and lists nine subject areas in which the Conservative Party dominated Coalition-Government is pulling back on green issues. Sadly, most of these represent hard-won advances made over the last ten years or so. Although there is more than just one environmental issue on which the government has carried out a U-turn, due to protests, the overall effect is a negative one on our environment:

Suggested new planning rules would terminate the hypothesis that the normal countryside is valuable and will definitely be protected. Instead, the default answer to development offers will be “Yes”.

The Green Investment Bank, set up to back major replenishable energy projects, won't be permitted to borrow till 2015, considerably limiting its powers. Critics say that's been a behind the scenes fix.

Natural Britain (wildlife watchdog), the Environment Agency and the Forestry Commission have all been told they're banned from policymaking, or commenting on policy.

The Sustainable Development Commission and the Royal Commission on Environmental Pollution have simply been dumped.

The Tory manifesto guaranteed the possession of unlawfully imported tropical timber would be a criminal offense. This guarantee has been left as if forgotten.

The meaning of “zero-carbon” for new eco-homes has been substantially diluted by not counting carbon emissions stemming from plugin appliances ( from cookers to Television sets ) – up to 1/2 of the household total.

The aggregates levy sustainability fund, which raised millions of pounds from sand and gravel and recycled it to virtually 2 hundred green projects, has been discontinued.

Funding is being withdrawn for 4 ocean-going tugs, for example, the Anglian Sovereign, designed for emergency towing of oil tankers in trouble.

Raising the road speed limit to 80mph will add more than 2,000,000 tonnes a year to Britain's CO-2 emissions, according to the Government's Global Warming Panel .

The Government decided to sell off the public forest estate, although there had been no mention of the idea in either the Conservative manifesto or the Coalition document. Public outrage stopped them.

What hope is there that more of these points will be turned around by public opinion, or the objections of the coalition's Liberals party members?

To read the original article go to http://www.independent.co.uk .