Bob Dylan has received many accolades throughout his long career as a songwriter, singer, and performing artist and among them many grammy awards. Dylan's professional career began in 1961 when he signed with Columbia Records. Fifty-five years later, in 2016, Dylan continued to release new recordings and was the first musician to receive the Nobel Prize in Literature.

“Bob Dylan Sings“. That's an opening statement which has brought untold joy to millions. It will continue to lighten the hearts for generations to come. Other artists will, and are, turning to Bob Dylan’s catalog for inspiration. No other contemporary songwriter has produced such a vast and profound body of work: songs that feel at once awesomely ancient and fiercely modern. From the Sixties protest anthems that made him a star through to his noirish Nineties masterpieces and beyond, he speaks beyond his generation. 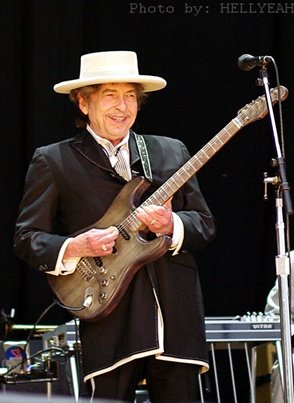 Folk and Rock all-time “great” artist, Bob Dylan, sang with two spirited and much younger jam bands, at the Grammies last night (2011). His on-stage backing comprised the groups Mumford & Sons and The Avett Brothers, at the 53rd annual Grammy Awards. The most notable was a boisterous rendition of Dylan's 1965 classic song “Maggie's Farm”.

Commentators have been saying that this was, to a degree, a homage to acoustic music which has been more popular this last year or so.

Dylan band members Stu Kimball, Donnie Herron, and Tony Garnier joined-in on the jam session. Those present said that it sounded more bluegrass than usual for Bob’s style. Some said they thought it a little “rockabilly” when Dylan sang without his guitar and with nothing but a microphone, and a harmonica in his hand.

Bob Dylan is the pre-eminent poet/lyricist and tunesmith of his time. He re-energized the folk-music brand, brought a new lyrical depth to rock'n'roll when he went electrical and bridged the worlds of rock and country by recording in Nashville. Bob Dylan is perhaps one of the most acclaimed influences in the music of the twentieth century.

It's the timelessness of almost all of his messages, but there's a poetic, lyrical quality to several of his songs that, when coupled with his rather rough voice, that's extraordinarily addictive. Bob Dylan is well known for songs that have philosophical, political as well as social influences. At the time when they were first released, his songs were welcomed by those that wanted something apart from the preferred and main-stream typical songs.

Dylan is among the world's most well-liked and commended composers, musicians, and performers, having sold more than 110 million albums and performed thousands of shows around the planet in a vocation that spans 5 decades. He recorded and released his first album, the self-titled “Bob Dylan”, in March 1962. Modern Times, released in 2006, became one of the artist's largest albums and sold right around the planet a total of more than 2.5 million copies and earning Dylan 2 more Grammy Awards.

It all started when, in the autumn of 1961, Dylan received a glowing review of one of his club performances in The NY Times, and was shortly signed to a recording contract with Columbia Records.

The Significance of Laboratory Glassware and Advanced Equipment
What is a Bird Flight Diverter? – Plus Marvels of Motion in Bird Flight

The owner of this website, is a participant in the Amazon LLC Associate Program, an affiliate advertising program designed to provide a means for sites to earn advertising fees by advertising related products from Amazon properties, including but not limited to amazon.com, endless.com, myhabits.com, smallparts.com, and amazonwireless.com
2 Shares
Tweet
Share
Pin2
Share