This is where we explain Hard Chrome Plating and the main Hard Chrome Plating process steps. Chrome plating (less commonly chromium plating) is a technique of electroplating a thin layer of chromium onto a metal object. The after product of chrome plating is called chrome. The chromed layer can be decorative, provide corrosion resistance, ease cleaning procedures, or increase surface hardness. Sometimes, a less expensive imitator of chrome may be used for aesthetic purposes.

What is Hard Chrome Plating?

Hard chrome, also known as industrial chrome, chrome gona, or engineered chrome, is used to reduce friction, improve durability through abrasion tolerance and wear resistance in general, minimize galling or seizing of parts, expand chemical inertness to include a broader set of conditions (such as oxidation resistance), and bulking material for worn parts to restore their original dimensions. It is very hard, measuring between 65 and 69 HRC (also based on the base metal's hardness).

Hard chrome tends to be thicker than decorative chrome, with standard thicknesses in non-salvage applications ranging from 0.02 to 0.04 mm (20 to 40 mm), but it can be an order of magnitude thicker for extreme wear resistance requirements, in such cases 0.1 mm (100 mm) or thicker provides optimal results. Unfortunately, such thicknesses emphasize the limitations of the process, which are overcome by plating extra thickness then grinding down and lapping to meet requirements or to improve the overall aesthetics of the “chromed” piece.

Increasing plating thickness amplifies surface defects and roughness in proportional severity because hard chrome does not have a levelling effect. Pieces that are not ideally shaped in reference to electric field geometries (nearly every piece sent in for plating, except spheres and egg-shaped objects) require even thicker plating to compensate for non-uniform deposition, and much of it is wasted when grinding the piece back to desired dimensions. 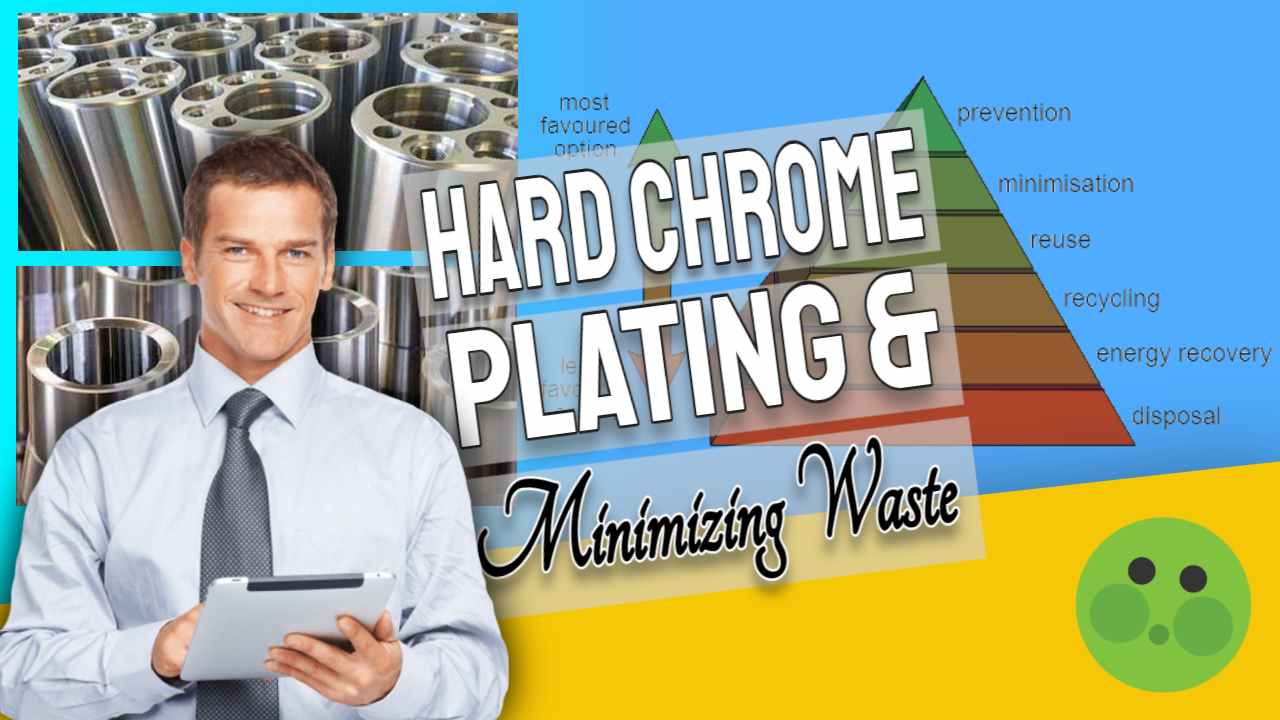 Modern “engineered coatings” do not suffer such drawbacks, which often price hard chrome out due to labour costs alone. Hard chrome replacement technologies outperform hard chrome in wear resistance, corrosion resistance, and cost. Rockwell hardness 80 is not extraordinary for such materials. Using spray deposition, a uniform thickness that often requires no further polishing or machining is a standard feature of modern engineered coatings. These coatings are often composites of polymers, metals, and ceramic powders or fibres as proprietary embodiments protected by patents or as trade secrets, and thus are usually known by brand names.

Hard chromium plating is subject to different types of quality requirements depending on the application; for instance, the plating on hydraulic piston rods are tested for corrosion resistance with a salt spray test.

There are many variations to this process, depending on the type of substrate being plated. Different substrates need different etching solutions, such as hydrochloric, hydrofluoric, and sulfuric acids. Ferric chloride is also popular for the etching of nimonic alloys. Sometimes the component enters the chrome plating vat while electrically live. Sometimes the component has a conforming anode made from lead/tin or platinized titanium. A typical hard chrome vat plates at about 1 mil (25 mm) per hour.

Various finishing and buffing processes are used in preparing components for decorative chrome plating. The chrome plating chemicals are very toxic. The disposal of chemicals is regulated in most countries.

The activation bath is typically a tank of chromic acid with a reverse current run through it. This etches the work-piece surface and removes any scale. In some cases, the activation step is done in the chromium bath. The chromium bath is a mixture of chromium trioxide (CrO3) and sulfuric acid (sulfate, SO4), the ratio of which varies greatly between 75:1 to 250:1 by weight. This results in an extremely acidic bath (pH 0). The temperature and current density in the bath affect the brightness and final coverage. For decorative coating, the temperature ranges from 35 to 45 °C (100 to 110 °F), but for hard coating, it ranges from 50 to 65 °C (120 to 150 °F). Temperature is also dependent on the current density because a higher current density requires a higher temperature. Finally, the whole bath is agitated to keep the temperature steady and achieve a uniform deposition.

One functional disadvantage of hexavalent chromium plating is low cathode efficiency, which results in bad throwing power. This means it leaves a non-uniform coating, with more on edges and less in inside corners and holes. To overcome this problem the part may be over-plated and ground to size, or auxiliary anodes may be used around the hard-to-plate areas.

From a health standpoint, hexavalent chromium is the most toxic form of chromium. In the U.S., the Environmental Protection Agency regulates it heavily. The EPA lists hexavalent chromium as a hazardous air pollutant because it is a human carcinogen, a “priority pollutant” under the Clean Water Act, and a “hazardous constituent” under the Resource Conservation and Recovery Act. Due to its low cathodic efficiency and high solution viscosity, a toxic mist of water and hexavalent chromium is released from the bath. Wet scrubbers are used to control these emissions. The discharge from the wet scrubbers is treated to precipitate the chromium from the solution because it cannot remain in the wastewater.

Maintaining a bath surface tension less than 35 dynes/cm requires a frequent cycle of treating the bath with a wetting agent and confirming the effect on surface tension. Traditionally, surface tension is measured with a stalagmometer. This method is, however, tedious and suffers from inaccuracy (errors up to 22 dynes/cm have been reported), and is dependent on the user's experience and capabilities.

The trivalent chromium-plating process can plate the workpieces at a similar temperature, rate and hardness, as compared to hexavalent chromium. Plating thickness ranges from 0.005 to 0.05 mils (0.13 to 1.27 mm).

Which Plating Method Is Right for You?

From a health standpoint, trivalent chromium is intrinsically less toxic than hexavalent chromium. Because of the lower toxicity, it is not regulated as strictly, which reduces overhead costs. Other health advantages include higher cathode efficiencies, which lead to less chromium air emissions; lower concentration levels, resulting in less chromium waste and anodes that do not decompose.

One of the disadvantages, when the process was first introduced, was that many decorative chrome customers disapproved of the colour differences. Companies now use additives to adjust the colour. In hard coating applications, the corrosion resistance of thicker coatings is not quite as good as it is with hexavalent chromium. The cost of the chemicals is greater, but this is usually offset by greater production rates and lower overhead costs. In general, the process must be controlled more closely than in hexavalent chromium plating, especially with respect to metallic impurities. This means processes that are hard to control, such as barrel plating, are much more difficult using a trivalent chromium bath.

Decorative chrome is designed to be aesthetically pleasing and durable. Thicknesses range from 0.002 to 0.02 mils (0.05 to 0.5 mm), however, they are usually between 0.005 and 0.01 mils (0.13 and 0.25 mm). The chromium plating is usually applied over bright nickel plating. Typical base materials include steel, aluminium, plastic, copper alloys, and zinc alloys. Decorative chrome plating is also very corrosion resistant and is often used on car parts, tools and kitchen utensils.

What is the Difference Between Hard Chrome and Decorative Chrome Plating?

Most bright decorative items affixed to cars are referred to as “chrome”, meaning steel that has undergone several plating processes to endure the temperature changes and weather that a car is subject to outdoors (although the term then passed on to cover any similar-looking shiny decorative auto parts, including silver plastic trim pieces in casual terminology). Triple plating is the most expensive and durable process, which involves plating the steel first with copper and then nickel before the chromium plating is applied.

Prior to the application of chrome in the 1920s, nickel electroplating was used. In the short production run prior to the US entry into the Second World War, the government banned plating to save chromium and automobile manufacturers painted the decorative pieces in a complementary colour. In the last years of the Korean War, the US contemplated banning chrome in favour of several cheaper processes (such as plating with zinc and then coating with shiny plastic).

Environmentally Friendly Shoes? Why Buy Them

The owner of this website, is a participant in the Amazon LLC Associate Program, an affiliate advertising program designed to provide a means for sites to earn advertising fees by advertising related products from Amazon properties, including but not limited to amazon.com, endless.com, myhabits.com, smallparts.com, and amazonwireless.com
Loading Comments...
1 Shares
Tweet
Share
Pin
Share1
Share